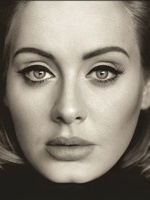 Last month, Page Six reported that that the singer was struggling to make it through rehearsals for her Las Vegas residency because she was constantly “shouting and sobbing” on the phone Paul.

On Tuesday (Feb 1st), the “Hello” singer took to Instagram to share the news that she will be performing at the Brit awards on February 8th.  She ended her post with, “Oh, and Rich sends his love [black heart emoji].”

Although she initially announced that her residency at the Colosseum theater would only be postponed, sources say that the show is done for good.

Las Vegas-based journalist Scott Roeben tweeted Tuesday (Feb. 1st), “Industry source believes Adele’s residency is done at Caesars Palace, as all preparations for the production have stopped, the sets have been loaded out and there’s no activity related to addressing concerns that presumably led to the cancellation.

“The sound system Adele and her team insisted upon is being taken out, the original equipment is being re-installed. Source believes Adele may be picked up by Park MGM (Dolby Live) or Resorts World, but doesn’t think she’ll return to Caesars Palace. A costly debacle.”

Sunny 92.3 & Trane Care for Our Community