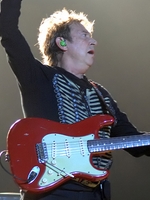 Police guitarist Andy Summers finally revealed the financial stats of the band’s massive 2007/2008 globe-spanning reunion tour. The long-awaited reunion trek spanned 158 shows, playing to 921,000 paying customers, and earned the band a $297 million gross. In 2008, they released a two-CD / two DVD collection chronicling the jaunt called The Police: Certifiable. The show was shot and recorded during the band’s stop in Buenos Aries.

Andy Summer, who recently published his first book of short stories, titled, Fretted And Moaning, looked back on the reunion dates revealing to The Telegraph, “The 2007 Reunion Tour was a giant pay-off for all of us and quite incredible: the most money I’ve ever made. We sold out every stadium in the world. And I hate to say it — well no, I don’t hate to say it — I think I was the highest-paid guitarist in the world during that Reunion Tour. I got about $1 million a night, and we did 150 nights. Someone’s got to do the job.”

When pressed to name the single greatest purchase of his life, Summers responded: “My Fender Telecaster I went into the Police with. The guitar became iconic and was absolutely my guitar that was identified with me, a kind of hybrid ­Telecaster I bought off a kid in L.A. for 200 bucks. It would be $1 million if anyone wants to buy it — but to sell it would be like giving away your soul.”

Summers was asked what the band’s most successful song was and explained, “Probably ‘Every Breath You Take.’ It’s the song that’s had the most plays in American radio history. As for how much we’ve made from it, I think there’d be several zeros there, and it’s still going on. It never ends. There’s only about five bands that have done this: us; the Beatles; the Rolling Stones; maybe the Who, not certain; maybe Pink Floyd.”