Def Leppard Guitarist Hopes Vince Neil Will Be Working Out 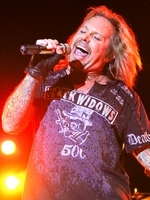 Def Leppard guitarist Phil Collen weighed in on the conjecture that Motley Crue frontman Vince Neil might not be up to the task of touring in a multi-band, massive world tour. Neil, who has been filmed over the past few years performing in abysmal shape, will perform on “The Stadium Tour” as part of the Crue, along with Def Leppard, Poison, and Joan Jett & The Blackhearts. Phil Collen revealed that a trainer will be part of the touring entourage.

He added: “I can’t wait till we get out there. And hopefully Vince will be working out. We’ve got a trainer coming out. Yeah, it’s gonna be really cool.”

Collen spoke about the upcoming dates to St. Louis’ KSHE 95, with Blabbermouth transcribing some of the guitarist’s chat about the tour: “I talk to Nikki Sixx all the time. We’re friends. And I’ve known Vince forever. He’s gonna be part of our team. The way I look at this whole thing… We wanna take this tour to the rest of the world — in Europe, Australia, Japan, all over the place, South America — so it’s really important that everyone is part of the team. And we’re inspired. Me and Joe (Elliott) — actually, all the guys — we’re on the phone, and we start rehearsing in about a week.”

Leppard are no stranger to joint tours with massive bands. Phil Collen explained that there’s no competition — just an urge for everyone tom deliver their best show: “The great thing, when you go out on tour with Kiss, it’s all about the show; it’s not about trying to upstage anyone or do that. Yeah, you can have a bit of that going on, but then you live and die by the show, and you wanna make that great. And that’s a great lesson we’ve learned from Kiss, and we apply that.”

What Time Should Thanksgiving Start? Plus 10 More Turkey Day Questions