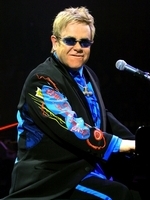 Elton John‘s guitarist for over 50 years maintains the “Rocket Man” is indeed quitting the road — but remains unsure if he’s actually done with performing. Davey Johnstone, joined the original Elton John Band in time for the 1971 Madman Across the Water sessions and currently serves as his longtime musical director.

We caught up with Johnstone, who’s just released his second solo set, Deeper Than My Roots, and asked him if he really thinks Elton’s farewell trek is really the end of the road.  Johnstone said: “Oh yeah. Oh yeah — we’re too bloody old! It’s not gonna happen anymore. When we finally get finished with this farewell tour, there’s no way we’re gonna do any more. There’s no way. . .  it’s just that . . . ‘Cause, y’know, I just turned 70, Elton’s 74. He’s ready for a break — but again, I never say ‘never’ with him. All I know is this is a farewell to touring. This is what this ‘Farewell Yellow Brick Road’ thing is. So, who knows what might happen? He might do something else, revue-wise, or maybe a one-man show somewhere. I have no idea.”