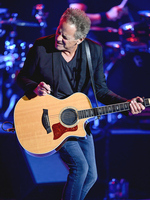 Prior to heading across the Atlantic for his 11-city European tour, Lindsey Buckingham has just rolled out four warm-up gigs at home. The ousted-Fleetwood Mac leader will kick off his brief Stateside jaunt on April 22nd in Kent, Ohio — and over the next eight days will hit Ithaca, New York; Glenside, PA; and Louisville, Kentucky.

Lindsey Buckingham has always tried to present a far smaller show than the bombast of Fleetwood Mac’s classic concerts, and spotlights the softer side of his musical persona. That said, unlike some of his peers who are leveled after a two-hour-plus show, Buckingham admitted he still feels as though he’s performing at the top of his game.