Captain Jack is a friendly guy, despite the fact that he was rescued from a neighborhood where local children were mistreating him. This 2-year-old black and white short-haired kitty doesn’t let his past keep him down. He may start out a bit shy, but he comes around easily with a little loving. He enjoys attention and being petted and brushed. He seems to do very well around other cats. Even some of the cats who were a bit sassy didn’t seem to bother him. Captain Jack is a great little guy who deserves a forever home. He’s a real gem in the making! 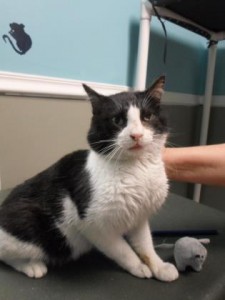 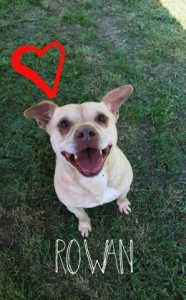 This 2-year-old Retriever mix is the ultimate cuddler. He loves to be petted. Let’s elaborate:  he loves belly rubs, butt scratches, head pats, chest strokes, and neck massages. When you stop touching, he leans in harder. He also is a bit of a smoocher but is not pushy about that. Rowan is housebroken and he loves treats – he will sit for them. With other dogs, he can be easily intimidated. He doesn’t mind a friendly sniff, but physical play is out of his comfort zone. He’s truly more of a lover than anything else. Since Rowan is a big, strong guy who is still working on some leash manners, he would do best in a home without children. With Rowan as your companion, you would always know that you are loved!