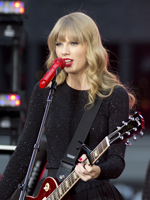 Rumors have been swirling about Taylor Swift making a cameo appearance on the season finale of Grey’s Anatomy. It started after she was listed in the credits on the IMDb page and her fans caught on to it and reposted it.

Billboard reached out to ABC and Taylor Swift’s team and she is yet to confirm or deny it.

The page, which has since been taken down, had her listed as appearing as herself. It wasn’t clear if any of her music would be included in the show.

Swift is famously a longtime fan of the series and even named her cat Meredith Grey, after Ellen Pompeo’s iconic character

The season finale of Grey’s Anatomy airs tonight (May 26) on ABC.

Is Taylor Swift going to appear on the #GreysAnatomy finale? Some Swifties seem to think so 👀 https://t.co/n9sRvtIGv3

Get in to win tickets to see Ed Sheeran in Nashville!