The Font Not Taken

I suppose like most self-proclaimed roadgeeks, I can claim Robert Frost’s The Road Not Taken as one of my favorite works of poetry.  Not that I have spent a considerable amount of time in my life actually reading poetry.  Like most familiar with the poem, I have probably misinterpreted its meaning.  Frost himself once characterized the poem’s meaning as “tricky,” and his biographer explained that while most ascribe its meaning to the benefits of making one’s own decisions and not “following the crowd,” the poem actually laments wasted time and effort over trivial decisions, and carrying the weight of regret for decisions past that cannot be remade.

All this to say that the playground of roadgeekdom is not so much the roads “less traveled by,” but the roads most traveled, i.e. our Interstate Highway System.  Oh, sure, there is a certain serene value to traveling back roads where the scenery is more likely to be quaint and less homogenized.  The late Charles Kuralt made a career out of it.  But judging from that which is available via the internet, a lot of us enjoy the world of exit ramps that lead to varying arrays of cookie-cutter buildings that house gas n’ go convenience stores, Cracker Barrel Old Country Stores, fast food joints, and franchised overnight lodging establishments like Super 8, and Holiday Inn Express, and the inevitable advertising signage that precedes those exit ramps.

That world also includes mile markers that mark your road position, highway shield signs that identify the highway on which you are traveling, and the ever-present BGS.  What’s BGS, you ask?  It is the descriptively named Big Green Signs developed by the founders of the interstate system used mostly to provide direction to the traveling public.  Most folks don’t give these signs much thought, and you may be thinking, “Well, if he’s writing about highway signs on the interstate, this is going to be a boring read.”  But wait.  There’s an apparent controversy surrounding those BGSs, and where there’s controversy, there’s a story to tell.

If you’ve driven I-459 around Birmingham lately, you may have noticed that some of the direction signs, particularly the ones connecting I-459 with I-20 and I-65 look different than the one’s you’re used to seeing.  Chances are, upon first glance, you notice something different about those signs, but you’re unable to identify just what it is.  Besides, you’re driving, and your brain is otherwise occupied.  The difference, however, is the font.  Now, given what has already transpired in the 2016 Presidential race, this country has much bigger issues to be addressed than which font to use on highway signs, but for some, the battle lines are drawn and all drivers must choose a side…Highway Gothic vs. Clearview.

The following photos display both fonts.  The left photo displays Highway Gothic, while the right photo was taken after that sign was replaced in 2011 by a sign displaying Clearview.  BTW, these pics come from one of my all time favorite roadgeek websites, http://www.aaroads.com That sites like this even exist supports my claim that there are a lot of us enamored with the roads most traveled.  And if you think the Clearview vs. Highway Gothic question hasn’t fueled passions on both sides, here’s a link to the AARoads on-line forum. http://www.aaroads.com/forum/index.php?topic=1411.0 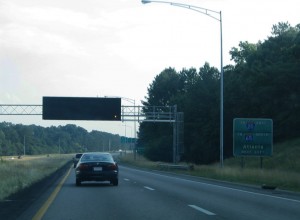 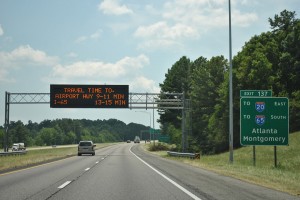 Perhaps the following photo from Pennsylvania better represents the difference between the two fonts. 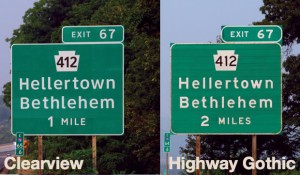 Now, some history.  Prior to the 1956 enabling legislation that created the Interstate Highway System as we know it, a couple of organizations left over from FDR’s time as President, The American Association of State Highway Officials, and the Bureau of Public Roads, were primarily engaged in developing highway standards to insure smooth highway travel from state to state.  Before FDR, crossing a state line could put you on a road built from completely different materials with standards, including format and placement of signage, completely foreign to the state you just left.  In the mid-1950s, these groups began testing different types of sign fonts and color combinations to determine not only which signs could be most easily read at 60 MPH, but which types of materials could withstand the elements, from desert heat in the southwest, to snow and ice in the midwest and northeast, to the heat and humidity of Florida.  Once construction of the interstates began in the late 50s, a few of these type of tests were repeated, with volunteers, checked to make sure they weren’t colorblind, driving on Washington, DC, area roads not yet open to the public adorned with signs of differing colors and fonts, and stating their preferences to highway technicians riding in the car with them.  From those surveys came the selection of the Highway Gothic font with a reflective surface, and the determination that direction signs be green.

Highway Gothic on Green remained the interstate standard until 2004.  About a decade earlier, a guy named James Meeker had developed a Clearview style font for a sign project for the state of Oregon.  Meanwhile, the Federal Highway Administration determined the then 30 year old font with its reflective covering might create a hazard for the increasing number of aging American drivers.  After extensive testing by researchers at Penn State, Clearview was approved for provisional use on interstate highway directional signs.  It was stated that one of the benefits of Clearview was that it was larger and easier to read (improvements for the reflective covering were also made and applied to signs of both fonts) without requiring sign surfaces to be larger.

While a substantial portion of interstate highway funding comes from the federal government, and certain highway standards are dictated by the federal government, the highways themselves are owned and maintained by the individual states.  Some states quickly adopted the use of the Clearview font, and at present about half the states have Clearview font signs.  Alabama has not set out to replace all their signs, but when signs have been replaced through the course of the past decade, Clearview signs have been used.  Georgia does not use Clearview signs at all, while Tennessee leaves the decision up to individual municipalities.  Currently, the only place you’ll find BGSs with Clearview font in Tennessee is in Franklin, south of Nashville.

The latest development in the ongoing BGS font saga came last week when the Federal Highway Administration, after 12 years, decided to rescind its provisional approval of the Clearview font.  Clearview font signage that currently exists will be allowed to stay, but no new Clearview signs will be approved.  When I first learned of this I was a bit miffed.  To my eye, the Clearview font is easier to read, and I figured it was only a matter of time before the Tennessee legislature got around to sanctioning its use statewide.  However, with last week’s announcement, I discovered something I did not know.  The real reason about half the states don’t use the Clearview font is that Joe Meeker’s design firm charges a licensing fee for the font’s use.  Highway Gothic is considered by the Highway Administration to be in the public domain, so there is no licensing fee.  Reportedly, the Clearview fee is quite modest, but who can blame state lawmakers for not wanting to pay for something that is only slightly different than what they get for free.

Then again, there is the question of what price for safety.  I’m sure the number of highway deaths and injuries would plummet if the government were to mandate all vehicles be built to the specs of armored tanks or if the national speed limit were lowered to 25 MPH.  I, for one, probably couldn’t afford a vehicle if it had to be built like a tank, so I would consider that to be too high a price to pay.  However, I’ve never had to bury a family member killed in a motor vehicle accident, either.  I don’t think you can blame Joe Meeker for all this.  He’s just trying to get paid for his work.  But the question remains.  Have we halted progress toward safer roadways simply because our lawmakers think we’ll object to this modest extra expense?

Meanwhile, 50 years from now our children may look back on this whole Highway Gothic vs. Clearview business as much ado about nothing.  If, as has been predicted, self-driving cars become commonplace in the next decade, will we even need BGSs?  A recent report from the World Economic Forum stated that 65% of children entering primary school this year will ultimately work in jobs that don’t yet exist.  Fifty some-odd years ago when I entered primary school, only a handful of pioneering radio stations in a few large cities had the idea of putting a someone in a helicopter to do on-air traffic reports.  It appears that within the span of my lifetime we will have gone from a time when traffic reports on the radio were something of a novelty to a time when they may become completely obsolete.

Maybe, like the narrative of the Frost poem, the Federal Highway Administration’s choice of the Highway Gothic font will become nothing more than a tale told with a sigh, ages and ages hence.  When smart cars choose the roads traveled by.  Still, making all the difference.

The Responsibility of Having a Voice.

Roll Down The Window & Crank Up The Radio