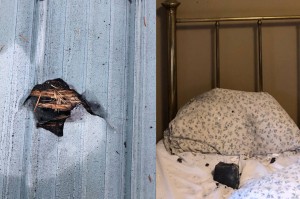 Imagine waking up to this:  An older lady in Canada named Ruth Hamilton was in bed last Monday when a loud CRASHING sound woke her up, and she felt some debris on her face.

At first, she thought the sound was a gunshot, but no one was around.  Then she realized that just inches from her head . . . there was a jagged, black ROCK resting on her pillow.  (???)

It was about the size of a softball, and there were a few smaller pieces too that had broken off.  So she was totally confused and decided to call 911.

Initially, cops thought it might be debris from a nearby construction project.  Crews have been doing some blasting in a canyon near her house to improve a stretch of road.  But they confirmed there WASN’T any blasting going on that night.  So what was it then?

It’s not clear if this has been confirmed yet, but they think it was . . . a METEORITE.

It turned out someone in the area had seen a meteor streak across the sky and EXPLODE.  And it looks like a chunk of it just missed Ruth’s head.

There’s a photo of the rock still on her bed, and a shot of the hole it punched in her roof.  She says the near-death experience has given her a new perspective on life, and she’ll never take things for granted again.

Categories: James and Kim in The Morning