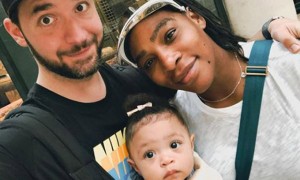 When we become parents we want to be there for every special milestone and moment in our baby’s life. But while today’s mothers are spending more time with their children than the generations before us did, but we’re also spending more time on paid work. So as much as we would love to be in two places at once, we simply can’t be. And sometimes, that hurts.

It’s a reality Serena Williams understands. She recently missed a milestone that many mamas look forward to witnessing: Her baby’s first steps.

“She took her first steps… I was training and missed it. I cried,” she tweeted Saturday.

It’s totally understandable that Williams was heartbroken to miss this milestone in baby Olympia’s life, but it’s a pain many mamas can relate to.

According to the results of a survey released by Motherly, 78% of mothers surveyed say they have mixed feelings about combining a career and motherhood, and that “there are real tradeoffs”.

Missing your baby’s first steps because you were training to compete as an elite athlete or because you were working a desk job could be considered a tradeoff of working motherhood—but Williams and other moms should absolutely not feel guilty about missing a milestone while they’re working (as Twitter users pointed out).

The truth is, missed milestones aren’t just a hazard of working parenthood, they’re a reality of parenting, period.

An Easy Hack to Make Pasta Stir Itself

Get in to win tickets to see Ed Sheeran in Nashville!

Rodizio Is Back On Finally Friday